You can travel to any part of the country but nothing can beat the charm of the lesser-known places as hoarded by tourists as Delhi. The capital city with its some distinguished places must be visited to understand the true culture of Delhi. there are some hidden places in Delhi that also must be visited by tourists to enjoy the essence of the place. This nursery is spread over 90 acres of land adjoining Humayun’s tomb. It is one of the 6 World Heritage sites with 300 trees and plant species and is often known as the paradise garden, complete with marble fountains, 80 resident bird species among other attractions. This is a culturally aesthetic, sophisticated place in Delhi that has become a perfect go-to place in recent times if you want to get away from the chaos of the city. It has faint little coffee shops, classic handmade art, and craft shops to creatively curated design shops. For tourists, this is an amazing place to visit because it has many outlets selling very good quality, authentic items including designer clothes and some of the rarest handloom Indian sarees and also silk. The rail museum was inaugurated in 1977 and it has the largest collection of trains in the country. The exterior of this museum captures one’s attention immediately with the famous trains from Bollywood films painted on the walls. Situated in Asola, the entire region of this lake comprises semi-arid forests punctuated with some of the most adventurous and scenic beauty trails in the country. It also comprises some narrow and forested roads which eventually go up to Blue Lake. the lake was formed as a result of the uncontrolled mining of sandstorms, Badarpur sand, and lime. This bridge is famous for its remarkable water harvesting dam dating back to 1343 AD. It was once known to harvest water with healing powers and the untouched relics of this ancient dam have made a perfect getaway escaping the chaos of the city. It is the only area in Delhi that has been known for 1000 years of continuous occupation and it also includes the ruins of Lal Kot built by Tomar Rajputs in 1060 CE which makes it one of the oldest extant Fort of Delhi. Majnu ka Tila is also known as “Delhi’s Little Tibet”. It is a delight for the wanderlusts. The place is also known for its colorful and narrow streets and offers a variety of cafes to cater to your needs with varied cuisines including the Ama Café and Rigo. Delhi war symmetry, located in the Delhi cantonment area, is the site of the graves of 1154 service personnel who had served the British during the two world wars. If you visit this place, at the entrance of the cemetery you will see the 1939- 45 War Memorial paying tribute to the efforts of the Indian forces during both the world wars. This place is a token of remembrance of one of the most popular influential poets and writers of the Urdu language. It is now a heritage site located in the Gali Qasim Jan, Balli Maran, old Delhi, and reflects the period when the Mughal era was on the decline in India. Jahaz Mahal was built under the reign of Mandu Sultan Ghiyas-Ud-din Khal ji, Who was believed to have as many as 15,000 women as his consorts. this mahal was built to accommodate the women belonging to the royal family. This is another one of the architectural masterpieces survey built in the area in the 14th century. The place is famous for its rustic feel and distinguished architecture. This place was originally built to service a hunting lodge for Firoz Shah Tughlaq but now it remains desolate and neglected in the central ridge forests and has been calling to quite a few tourists and photographs from all around the world. Built-in honor of the eunuchs of the Lodi era, this place with its calm ambiance situated in Mehrauli bazaar, is not so popular but it’s definitely worth the visit. Being the house of the graves of the great Sufi saint, Shaikh Jamali Kamboh, it is one of the most significant places to visit in Delhi. 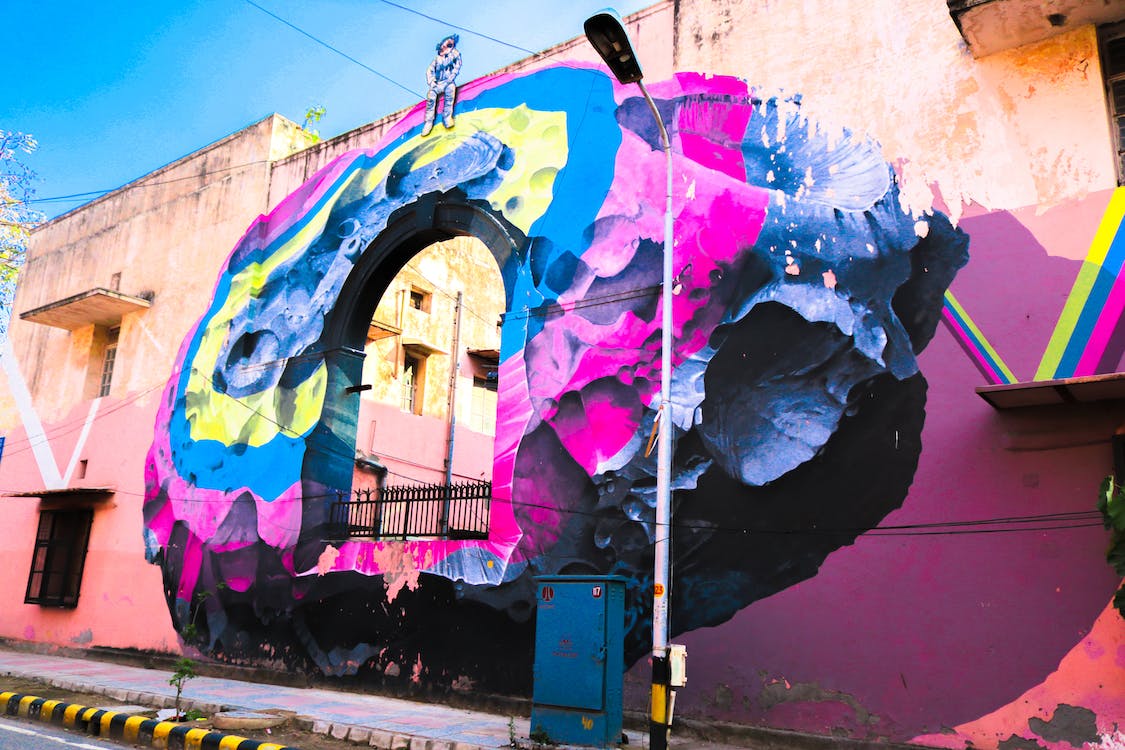 Lodhi Art District, located in Lodhi Colony between Khanna Market and Meharchand Market, is India’s first-ever open-air art district, where 25 street artists from India and around the world collaborated to paint the walls and create a masterpiece.