An unbelievably large section of this society is born in the slums, goes through the course of life unnoticed, and dies without leaving a mark. If anyone from the Jhund dares to crawl out of their space behind the walls, they are crushed back down.

This movie depicts wonderfully how a seemingly ‘developing’ nation is mindfully forsaking a vast number of its poverty-stricken citizens. Ignoring their presence and disregarding their existence seems much easier than taking them along.

Additionally, the movie Jhund piercingly showcases what others won’t – caste privilege. From dumping garbage in the homes to signs that say ‘Crossing the wall is strictly prohibited’ – Manjule says a lot without saying anything at all. 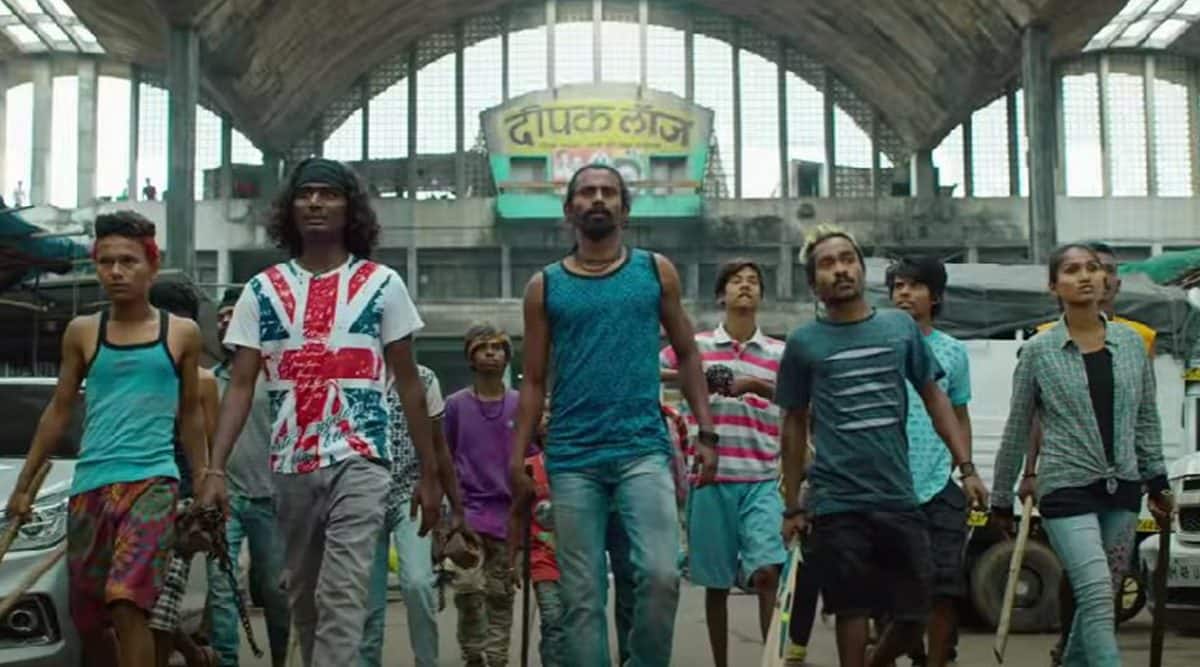 A story of survival in a society that blatantly ignores the existence of its impoverished counterparts begins with the protagonists indulging in petty crimes to satisfy their growling stomachs and stubbornly persisting in a world that is embarrassed by them. This is a raw story of the brutal caste system, ignorance of the ones in power, and the indifference of the privileged that is worsening the situation and thickening the wall – forcing us to rethink if Bharat does justice to its 1.3 billion population or just the privileged few.

A figure, based on the life of Mr. Vijay Barsee, turns this Jhund into a football player. While the movie may be termed a sports drama, it is not about football but the symbolism – a way out of the life of drudgery.

Shot brilliantly by the cinematographer, Sudhakar Reddy Yakkanti, the camera slickly romances the city’s slum areas as it goes beyond the wall of the social divide. What acts as a crowning jewel to the beauty of this movie is that no attempt has been made to beautify the slums or their occupants. The scenes are scathingly raw and unapologetically real – forcing the audience to travel to the slums of Nagpur and feel in real-time what the movie plans on delivering.

The Unseen, The Unworthy, The Unsung.

Gandagi being the slum kids.

The implication of this innocent question is deafening.

Many underdogs undergo a massive transformation just when a purpose enters their life.

A hope for a better future.

Some words of wisdom for the budding national football team.

With the film nearing three hours, it gets tiring and stretched out, losing focus in parts. The first forty minutes are spent in creating a setting, a background story of life in slums, which it does splendidly; however, you find yourself struggling to grab the point of this movie. It picks up the pace soon enough and entrances you with the deep message it carries.

Jhund takes its time familiarising you with the intimate lifestyle of the slum and emerges as a huge success – while hitting the bull’s eye. Even with its length, it is worth the watch!

Jhund is a call – To the country, society, and you.

In the 21st century, politicians having food with Dalits is still an election campaign. However, anyone bringing forth the brutality due to the highly problematic caste system is in turn termed casteist. We, as a nation, conveniently accept and ignore the existence of this age-old system as per our convenience while the struggles and atrocities grow deeper.

The anguish in the eyes of the Dalit protagonist is a desperate call to the masses for smashing the societal walls and extending hands to help them leap to the other side, as equals, as humans, devoid of all tags.

This splendid movie scratches many layers of our society and says a lot by saying nothing at all and makes it a must watch.