We all get entertained by rap songs flexing money and luxuriousness, but rap, in reality, is a form of poetry recited in a rhyme over the beats. India has names like Yo Yo Honey Singh, Badshah, and Raftaar making viral rap songs, but few people know about Indian underground rappers. Here is a list of some of the best Indian rappers who could win Indian audiences’ hearts with their talent.

10 Best Indian Rappers Whose Bars Are Above The Sky

Krsna is among the most talented and lyrically submissive rappers in the Indian underground hip-hop scene. He is proudly a partner in the music label Kalamkaar alongside Raftaar. He has been active in the scene since 2006 and still makes noise with his bars. His real name is Krishna Kaul. He has also featured in the movie Gully Boy and has been making waves for the past two years because of his involvement in Beef culture.

His real name is Ravi Mishra. Raga shot to fame with his song Jamnapar, which was released in 2016. He chose to be known as Ewell Myth in his early underground career. The way his voice sounds has a different vibe, and so do his lyrics. Raga has also released an album, a collaboration project of Artistaan and Sony Music. He is very picky with his music and releases songs after noticeable gaps.

Some of you might have heard him killing the best with Raftaar in the song ‘Naachne Ka Shaunk.’ His real name is Vignesh Shivanand, and he was born in Kanchipuram. Tamilnadu on 27 March 1990. Rolling Stone has considered Brodha V as a part of the Hip-Hop Elites. He began rapping at 18 and is still an independent artist. He released a song Aigiri Nandini with Sony Music seven years back. You can listen to most of his rap epitomes on his Youtube channel.

With the release of Gully Boy, Divine has witnessed a substantial upper slope in his career. But the movie wasn’t only inspired by Divine. Naezy was also the inspiration behind the hip-hop story. Not many people know this, but Naezy has made his Bollywood debut with the song ‘Birju’ from the movie Hey Bro. Well known for his raps in the Mumbaiya slang language, Naezy was born on 10 August 1993 in Kurla, Mumbai. His real name is Naved Shaikh.

Fotty Seven, a.k.a Ankit Gidwani, has been a rapper active in the scene for a long time now. He started his rap journey when he joined Rapkingz DRC – Da Rapholic Crew. The band did release some catchy songs, but all the other members left, while Fotty Kept a belief in his art. He has done two songs with Badshah and one with Raftaar and has his EP released on the Kalamkaar label. Fotty Seven is known for his use of slang and unorthodox rhyming skills.

The lovers of hip-hop and rap culture may have come to know and hear a lot about MC Stan recently as he got praised and appreciated a lot for his album Insaan by big names in the game. He was born on 30 August 1999 in Pune, Maharashtra, as Altaf Shaikh and is amongst the best underground Indian rappers. Mera Flow was his first song, but he shot to fame with his song Wata released on his YouTube channel.

The kind of lyrics he uses to rhyme and connects and the way he flows on the beats make him stand apart. Born on 16 August 1999 in Borivali, Maharashtra, as Kunal Pandagale, Kaam Bhari is currently a signed artist with the label IncInk, owned by Ranveer Singh. Kaam Bhari gained mass attraction after his feature in the movie Gully Boy and the praise stories posted by Ranveer Singh. Before the movie, Kaam Bhari was featured in a Jack & Jones song, Don’t Hold Back 2.0.

You can call 7 Bantaiz the most united and lit Rap crew in the nation right now. The crew was formed in 2014. All seven rappers know each other from their school time and now are making noises in the Indian rap scene. They have a YouTube channel with over 162k subscribers. Songs like Meter Down and Jhoom Zara have given them the shot to fame.

A rapper who has still kept a hold of his roots as he raps in Haryanvi; Pardhaan is one of the most underrated Indian rappers. He first featured in the song Panga (Bera Ni Paatega) with three more artists in 2012. The song was released on Desi Beam’s YouTube channel. His collaborations with the likes of Bohemia, Parmish Verma, Neha Kakkar, and Benny Dayal are enough to talk about the kind of talent he is.

Gaining popularity through MTV Hustle, Srushti was new to the world of Rap and started to write songs in 2020 during the lockdown. Every song Srushti Tawade sang in 2022, went viral. Srushti enjoys writing on current and social issues. She says she met a guy on a dating app who asked her to participate in MTV Hustle. She uses Hindi, English as well as Marathi in her songs. 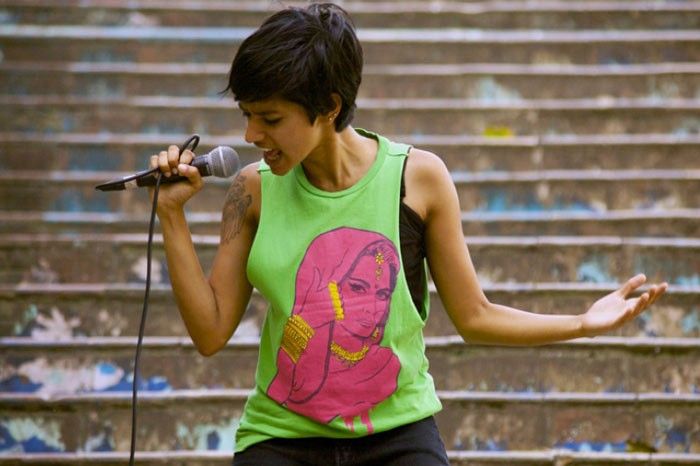 Bringing a revolution or a change with art is above a Grammy for a music artist. Sofia Ashraf, probably the most sought-after Indian rapper, has helped families get the requisite compensation through her songs on the negligence of corporations that fail to clean up industrial disasters. While she is not that active in the scene, she deserves to be a part of the top Underground Indian rappers list.

Bohemia will forever be the first fire that is the reason for the heat that the Indian hip-hop scene is now producing. Desi Hip-hop has evolved a lot, but currently is the time when it is at its peak and is at a stage where rappers can turn their bars into lavish lifestyles just like Western Rappers.

It’s time for you to prepare a list of Rap songs from the rappers featured here. Make sure to tell us which Indian rapper has got a vibe for you!